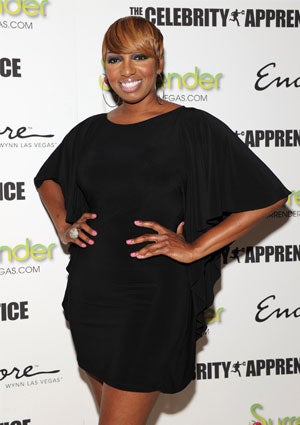 Last night “Celebrity Apprentice” put on a thrilling two hours of television. My goodness! With NeNe Leakes as project manger, Dionne’s poor sportsmanship and La Toya Jackson proving she’s only useful to keep time, we couldn’t take our eyes off the screen.

The teams were charged with creating a 30-second commercial selling ACN’s video phone, and boy, did the actresses put on Academy Award performance!

If you caught the show, you know Leakes was this week’s shining star. Though she couldn’t lead the team to victory — losing for the third straight time — we’ve collected Leakes’ five best quotes from the night. See what lines kept us babbling with our girlfriends…

1.) “Well damn! What woman can’t go out and get a sofa and two chairs?” — NeNe grew quite upset when she learned that Hope Dworaczyk couldn’t contribute more to this week’s challenge. She needed everyone to pull a little more weight but Dworaczyk seemed content with just hanging in the background. Again, who is that girl?

2.) “Quiet on the set!” — NeNe loved that she was behind the camera this time around. She showed everyone who’s in control by yelling numerous cliched director quotes. Got to love a Black woman in power.

3. “La Toya can’t tell you what one plus one is. Like, damn. Who can’t tell you it’s one o’clock?” — Referring to La Toya Jackson’s lack of usefulness this week, claiming poor vision, leaving her to manage only the team’s time schedule.

4. “Who are you? I don’t wake up in the morning and say Star Jones was on ‘The View!’ I don’t give a damn what show you were on at the end of the day! I could give a f**k! Blink!” — Leakes really let it out this time around. She got tired of Star Jones coaching her during presentation practice. Though we must say Jones knows a thing or two about talking in front of crowds and Jones did show her up during her portion of the presentation.

5. “Keeping the time, my 11-year-old son can keep the time!” — NeNe Leakes about La Toya Jackson defending her role in this week’s challenge in front of Donald Trump. We have to say Jackson could have given a little bit more elbow grease. She needs to prove she’s worth a little more if she wants to stay relevant in the game.

Honorable Mention — “No it’s too late, Dionne. You’re fired!” — Donald Trump giving Dionne Warwick her papers and sending her off. Warwick had the audacity to challenge Trump to fire her and he delivered. Looks like Warwick will have all the time in the world to rest now.

By the end of the episode, Leakes was in tears. She claimed she worked so hard for her charity, Atlanta Union Mission in Support of My Sister’s House. She opened up to the boardroom that she was a victim of domestic abuse for about five years. Team A.S.A.P. came close to winning, earning 47% of the vote of ACN employees during the commercial competition.

Come back next week for our episode five recap. From the previews it looks as if team Backbone’s winning streak may be coming to an end.