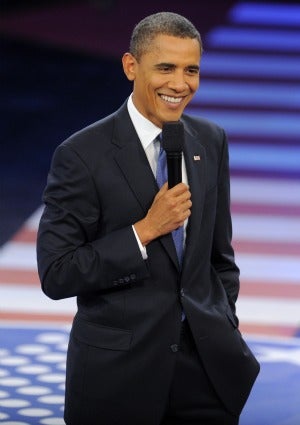 With midterm elections weeks away, President Obama is urging young people, who helped him get elected in 2008, to vote this November. On Thursday at the BET Studios in Washington, DC, the President took the stage before approximately 250 young people for a town hall meeting called “A Conversation with the President.” The conversation aired live on MTV, BET and CMT. So far the President, as he reminded the town hall audience, has passed a number of policies that specifically benefit young voters–including an overhaul of the federal student loan program (eliminating private lenders as middlemen and drastically boosting aid for students), and a provision under health care reform allowing them to stay on their parents’ policies until the age of 26. Yet direct engagement with young people, to the same degree by which they were targeted during the 2008 campaign, has been less than consistent. This may account for at least some of the lack of enthusiasm among young voters now (although, traditionally, they don’t show up for midterm elections anyway). Despite the label of apathy often slapped on young people–and reports that MTV solicited “light,” pop culture-based questions for the event–participants in the town hall had pointed policy questions for the President, challenging him on the economy, education, immigration, Don’t Ask Don’t Tell, race relations and Sudan. “This is an example of where young people have taken the lead,” Obama said in response to a question on about violence in the Darfur region of Sudan, which rarely makes national headlines but has sparked activism on college campuses. He explained his administration’s current effort of organizing a referendum to allow independence for southern Sudan in a peaceful fashion. “We’ve only got about 90 days to get this done,” he said, calling it one of his highest priorities. After the specific policy discussion, the President concluded with an appeal for young people to stay politically involved. “Regardless of who you vote for, regardless if you found anything I said persuasive, I need you to vote on November 2,” he said. “One of the things that happened in the last election is that young people got involved in ways that they had never gotten involved in before and that has to sustain itself, that has to maintain itself. Because the only way we’re going to solve these problems is if everyone is seriously engaged.” For more of Cynthia Gordy‘s Obama Watch stories, click here.