TV films don’t get as controversial, and hotly-debated, as Lifetime’s upcoming Whitney Houston biopic. Newcomer Arlen Escapeta is in the thick of it as he prepares to play Houston’s ex-husband, Bobby Brown. The controversy has brought both visibility, and criticism, to the Belize-born actor, who is currently starring in the summer blockbuster, In the Storm.

He chatted with Essence.com about laughing through the hailstorm of negative comments (“he’s too effeminate,” “He doesn’t look like Bobby!”) and why he totally understand the Houston family’s decision not to support the film.

Essence: You get this call, ‘Arlen, you’ve been cast as Bobby Brown.’ What goes through your mind?
Arlen Escapeta: Honestly I couldn’t even believe it. I worked really, really hard at the initial audition. I’d worked with Angela’s husband, Courtney [Vance], on Final Destination 5 and I’d met her prior to so when I first went in to audition I sent him a text message, saying ‘Hey, I’m going in to read for Angela. I’m not sure what’s going to happen but either way I would love to get any type of feedback from either you or her in regards to myself as an actor to grow in the future.’ Getting the call man, that blew my mind. Three hours later I was in wardrobe fitting.

Essence: Soon after you were announced, a photo of you and Yaya Dacosta was released. Did you read all the comments?
Arlen: Oh yeah, I read everything. 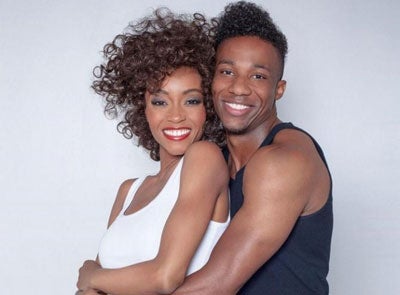 Essence: What did you think?
Escapeta: I laughed and I smiled. I said, ‘You know what, this is good because people care. That’s what matters.’ A lot of people were like, ‘He doesn’t have the gap.’ Fine, I didn’t have the gap. We tried the gap. Unfortunately the dental piece that they made just didn’t look real enough. Then there was the Gumby. People said it was too wavy, and Bobby didn’t have “good hair.” If you read Bobby’s unauthorized biography, there’s a part in there where he was alleged to have said some of the guys in New Edition were jealous of him because his hair was always extra curly. Then some thought I looked effeminate in the pictures. I said, ‘Listen, if I looked effeminate, maybe it’s because I was happy.’ That wasn’t even an official photo shoot. We just did that … I took off my t-shirt, stood next to Yaya and smiled for the camera.

Essence: How does one prepare to play Bobby Brown? Did you grow up listening to him and Whitney?
Escapeta: I grew up dancing to Bobby. When I was younger “My Prerogative” was my song. I won a dance contest at my older sister’s 15th birthday party dancing to it. I’m from Belize, and one time we went back to Belize for my Aunt’s wedding and I begged my Mom to let me take my tape. She said, ‘You don’t need to take this tape with you. They’ll have music there.’ We get to Belize and all they were playing was punta, soca, reggae, and dancehall… I was so mad. I wall-flowered the entire time. I refused to dance because I could not bring my Bobby Brown tape.

Essence: Have you heard from Bobby?
Escapeta: I haven’t. I sent him a tweet and thanked him for his class and grace. I learned so much about him, and how much weight he carried, while preparing for this role. He’s an icon in his own right. He deserves accolades and all of the awards that he’s won through the years. He’s a class act.

Essence: What do you think of the family saying they won’t support this project?
Escapeta: I understand. This hits home. It pulls on your heartstrings. It’s their mother, their aunt, their life. Sometimes it’s better to have that distance there just so that you don’t have to re-live something that you really went through. For us as actors, and an audience, it’s easy to want to watch, look or create because it didn’t happen to us. To tell your own story; sometimes that’s not comfortable. I’d love to let them know that we all approached this from a place of love. There wasn’t a malicious angle in anyone’s intent and I feel like the end project is going to tell that story. We love Bobby. We love Whitney. We love Bobbi Kristina. We love the family and we appreciate them.

Essence: What will you be doing when the film finally airs?
Escapeta: Hopefully I’ll be working on someone else’s set and continuing to grow as an actor. Who knows.

This interview has been edited and condensed for clarity.