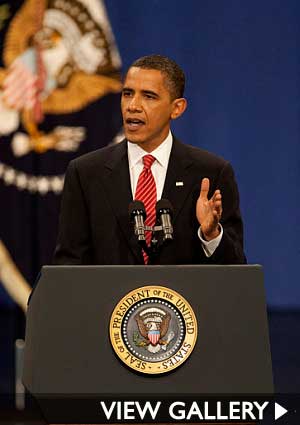 Even more daunting are the Depression-proportioned unemployment rates for African-Americans, particularly for young Black men between the ages of 16 and 24 who are facing joblessness at 34.5 percent. It’s an emergency state of affairs that has triggered groups such as the NAACP, National Council of La Raza and the Congressional Black Caucus to push for the White House to take more action. Healthcare reform for the future is well and good, but with so many people out of work today, something’s got to be done.

I asked White House Press Secretary Robert Gibbs, at the briefing yesterday, whether any sessions at today’s Jobs Summit would specifically address the higher unemployment rate among minorities. The question seemed to catch him off guard, given his vague answer.

It didn’t strike me that the issue ranks particularly high on the White House radar. Minnesota Representative Keith Ellison, a member of the Congressional Black Caucus, had a similar impression about Gibbs’ response to my question, when asked about it today on the Sirius XM Radio show, “The Morning Briefing,” hosted by Tim Farley.

“His response leaves me feeling that he does not understand what we’re talking about, or doesn’t care or appreciate what we’re saying,” said Ellison. “With an answer like, ‘Oh, we’re doing something for everybody and they’re in there too and that’s just fine,’ it just strikes me as slightly dismissive and not focused. And I think he needs to get focused because when you’re talking about 34 percent unemployment among minority youth, while the rest of the country is facing 10.2 percent unemployment–it’s bad for everybody, but it’s not the same for everybody, and we’ve got to have the press secretary for the President get that. He needs to say, ‘We’re doing specific things for this group of Americans who are specifically damaged in this economic recession. Extra help for extra hurt.”

I’ll be interested to see what kind of ideas–and more importantly, what kind of follow-up–come out of the summit. Here’s hoping that it’s more than just talk.