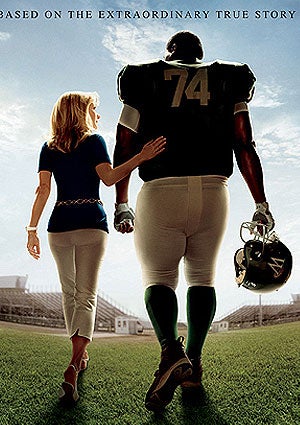 ‘The Blind Side’ tells the true story of Baltimore Ravens rookie Michael Oher, a fatherless young boy who lived with his drug-addicted mother in the projects of Memphis, Tennessee. Despite his harsh circumstances, a determined Oher vowed early on to make sure he had a better life. A well-to-do White family, the Tuohys, take interest in the teen, moving him into their home and helping the boy to discover his full potential. Oher later gets drafted to the NFL, and with the help of his adopted family and coaches, becomes an All-American offensive left tackle.

Although the film has racked in over $130 million, it did not sit well with some African-Americans, who criticized the director for depicting Oher’s character as childlike. This was one of ABC’s news correspondent Deborah Roberts’ main reasons to pursue the authentic tale of  the film so in a one-hour special edition of 20/20, “The Blind Side: The Real Story Behind the Movie,” will air today at 10 P.M.

“I haven’t spoken to anybody who has not liked this movie or who has thought that it is offensive after seeing it. But, I wanted to explore the criticisms,” says Roberts.

“Most people see it as a beautiful story of love and giving. On the other hand, there is an elephant in the room, which is: the story is being told through the eyes of the White family and the Black kid who is the beneficiary of their kindness.”

Roberts is the first to interview the gifted football player, traveling back to his hometown to speak with the real life family from the movie—mother Leigh Anne Tuohy, husband Sean Tuohy and children Sean Jr., and daughter Collins.

A few members from the cast react to the negative outlash. Actress Sandra Bullock, who plays Leigh Anne Tuohy, said, “Give me a break, when you talk about people reaching out to help people who can stop for a second and start analyzing the color issue.”

Still, Hollywood glossed over a few details in the NFL rookie’s life. Oher explained to Roberts, laughing, that the Tuohy’s did not find him on the side of the road shivering, like they portrayed him in Tinseltown, and that their relationship with him was gradual.

“He is happy with the story and grateful that it might inspire people but he makes the distinction that when you go to the movies and you see this film, know that you are not necessary looking at him but an actor that’s portraying parts of his life,” says Roberts.

She ends with her take on the real-life Michael Oher, “He is a lovely guy and I think he doesn’t want to be seen forever as this kid who is rescued by this family. He is a man now. And, I think he is destined for greatness.”

Watch a preview of Deborah Roberts interview with Michael Oher.