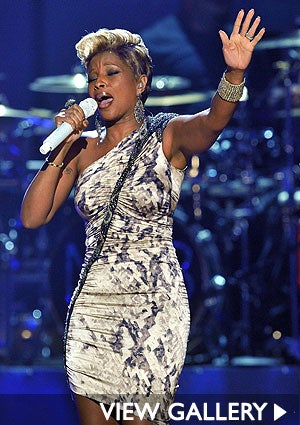 On November 29, 1994, Mary J. Blige released her second album “My Life” which changed the course of R&B music, ignited the career of a young singer from Yonkers, NY, and would give Black women an mantra of strength, emotional rescue and survival. Here we celebrate 15 years of Mary’s seminal album “My Life” with images from her life.

“My Life,” the album title says it all. But it was more than that. Mary J. Blige represented a new mixture of old soul music combined with hip hop beats. The lyrics were about being a woman–unapologetically female. The first single “Be Happy” spoke to Mary’s own demons but also sent a spiritual message to the masses about wanting something better for ourselves in life. Her 2001 hit “No More Drama” and the 2006 “One” rerecorded with U2, both have that same universal appeal.

Mary worked with Sean “Diddy” Combs on “My Life.” The magic between these two minds came together in the mixing of the musical styles. Using samples or remakes from classics like Rolls Royce’s “I’m Going Down,” the Mary Jane Girls and Rick James “All Night Long,” and Barry White’s “It Feels Like Ecstasy When You Lay Down Next to Me.” This is the music our parents listened to and it was familiar but reinterpreted for us with hip hop swagger. Curtis Mayfield, Isaac Hayes and Al Green are all rhythmically or melodically present in some way shape or form. Even the title track “My Life” samples “Everybody Loves the Sunshine” by Roy Ayers.

And then there was Mary’s own life. She struggled with depression, domestic abuse and matters of the heart. She had men problems, financial difficulties and was spiraling. The press said she had a bad attitude–sound familiar? But through her beautifully imperfect voice, she spoke to us–intimately and lovingly. She could see us. And in telling her own story was also communicating our own narrative. Mary was one of us–she sang our song.

In 15 years we have seen Mary J. Blige morph into a woman. She works hard, takes care of herself and continues to push herself and us. Mary found love and a good man. Her music, her branding and marketing, her beauty and style. Her international appeal is inspiring to say the least. Now she is really helping other women with FFAWN (The Foundation For the Advancement of Women Now). While we wait with baited breath for Mary’s latest album due out later this year, we wanted to reminisce about the classic album “My Life.”
Loading the player...