Karrueche Tran has packed a lot into 27 years, and she’s just getting started. Camera and follow count aside, she has those girl-next-door vibes– cool and a little shy, but definitely shares lot of the same habits as you and your bestie. She still indulges in beauty excursions at Target, won’t leave the house unless her brows are #OnFleek and works out, but still has the occasional craving for an In N’ Out Burger (Animal Style!) We had a chance to catch up with the model-turned-actress who is also an entrepreneur and —as of this month— a beauty maven, debuting her collaboration with ColourPop cosmetics; all while simultaneously working 16-hour days on set for her upcoming role in the movie Only For One Night.

Her collection with the uber trendy cosmetic brand ColourPop is appropriately titled, “KaePop,” and it’s something of a makeup gold mine. To put it frankly, it’s a “glo-up” kit— literally—one of the highlighters is called “Glo Up” and everything in the collection is under $10. What makes the collaboration even better is that it benefits the Environmental Media Association, an organization that Karrueche holds near to her heart that educates the public about environmental issues and encourages them to take action. Composed of an assortment of shadows, highlghters, a blush and lip options, each piece in the KaePop collaboration plays off of a nude and merlot color palette that is inspired by Karrueche’s general go-to beauty look: glowing skin and matte lips.

“I get complimented a lot on my makeup on a day to day basis. The colors [in KaePop] are very warm and neutral, which I love because it goes well with any skin tone. I wanted my line to be original so I thought [it best] to keep this first collection true to me—something everyone can wear and transition easily from day to night,” she expresses. 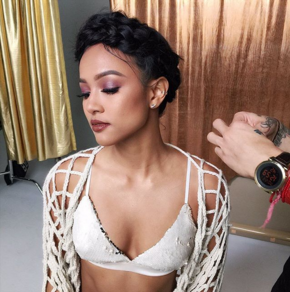 Three matte lips, a blush, two bronzers, and four shadows make up the collection, each with a fun name that channels Kae and her love of beauty and LA. With everything being offered at such an affordable price, the entire collection can be purchased for just $72 dollars. So instead of splurging on that designer contour palette, you could re-up your entire makeup stash in time for Spring, or at least to keep your glow throughout these harsh winter months!

“I go to [beauty retailers] and get lost. I walk out with three items, but I’ve spent $200 dollars,” Karrueche commented. It was important for her to design pieces that could be accessible and worn by all. “With KaePop, most girls can afford it. It’s [affordable] makeup that’s still great quality and a really great grade with an even better price.” ColourPop x Karrueche launches on February 4, 2016 and will be sold exclusively on the ColourPop website. 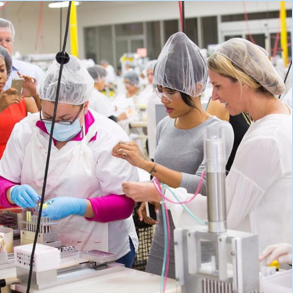 In addition to a highly sought after cosmetic collaboration, “Rooch,”—as her friends call her— has a movie in the works and also dabbles in philanthropy. Kae hasn’t been swept up in the haze of fame. “I don’t look at myself like, I’m Karrueche Tran,” she says stifling laughter. “I’m a girl who grew up in LA who had two jobs four years ago.” While she may be just that, she intends to use her name to promote charitable giving, love and positivity, which takes form in her “With Love X Karrueche Tran” movement. The namesake was inspired by the her own personal mantra, which she has tattooed on her arm “Where there is love, there is life.” She considers her social platform a blessing and still pinches herself on occasion at the realization of her fame. “I have 4.2 million followers! ” she exclaimed during the interview almost stupefied that so many people are so in tune with her life. “The best thing I can do is promote something that’s close to me and something that I believe in that everyone can relate to.. I love the fact that I can promote positivity and everyone can grasp onto that,” she noted when asked about her social media practices.

“The reason that I chose [the tag] “with love” is because it is so general, and yet everyone can relate to it. [For me] ‘With Love’ means living your life with love, through love. Doing acts of love and learning to live through your heart,” she states. Fans and celebrities friends alike have embraced the movement as everyone from Future to Kendrick Lamar have been spotted sporting the popular—and limited edition—apparel.

While she credits herself as a woman who is still growing and maturing, she celebrates who she is in the present, is grateful for her experiences and looks forward to the future, resolving to smile more and always abide by her mantra, “where there is love there is life.” We hear you, Kae!

One thing is certain, you can get used to her shine because Karrueche Tran isn’t going anywhere, anytime soon.