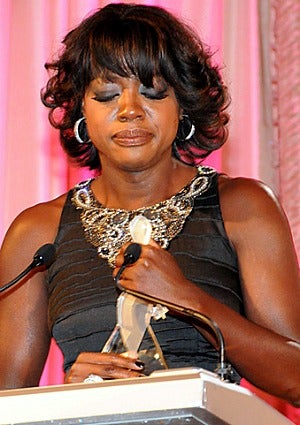 When it came time for Viola Davis to accept her award at this year’s ESSENCE Black Women in Hollywood Luncheon, the Academy Award-nominated actress didn’t hold back. Her speech about Black women overcoming adversity and Black actresses striving to work, despite a real lack of roles for them in Hollywood, was honest and inspiring — and we had to share it with you in its entirety…

“You know, they say that if you throw a piece of cheese in a room full of rats, they claw at each other to get the cheese. Inevitably, the rat that gets the cheese, first, is going to be really tore-up. And that’s often how we meet each other, as Black actresses. We meet each other in competition, fighting for that one role that is designated for us, annually, because we so want it. We just want it. This is everything we dreamed of being, everything we thought was possible.

“And you know, they say that when you’re in an accident, you see your whole life flash before you. Well, when you win an award, you see your whole life flash before you and I have to tell you, when someone tells you that you’re getting an award, your first response is that you’re just stunned because you don’t feel like you deserve it. And I really don’t. And then, you get kind of excited because you think maybe you may have done something [to deserve the honor] … and then you get terrified. The terror comes because with any loss of anonymity comes isolation, the haters and then, responsibility. That’s the thing that really gets you — the responsibility. I’d rather just live for myself. The last time that I really had to step up to the plate was when my dad had pancreatic cancer and he was in a hospice. I had to tell him to go and I really would like to have not done that, but I had to because when God tells you something that you have to do, you have to do it … even when you think He chose the wrong person.

“The responsibility that we have as Black actresses is that we are in the midst of a crisis. We are severely underrepresented in this town. So many young, Black actresses come to my home and I used to always know what to say — ‘You study, you work hard and you try to be as great as you can be. Go to school, live your life.’ And now, I don’t even know what to say [to young actresses]. I just want to say, ‘I don’t know.’

“But, something came to me and what came to me is that when I was 9-years-old — to share my testimony — I was called into the nurse’s office at school. I grew up in an all-White community in Central Falls, Rhode Island, and I grew up in abject poverty. Sometimes there was no running water, there was bad plumbing, rats … you know the deal. We were called into the nurse’s office, my sister and I — she was in the same school. The nurse gave us a speech on hygiene. I think of this often. My sister and I were sitting there, completely and utterly humiliated. We had no hot water at home, but we loved school. I remember looking over at my sister and something else was going on with her. What was going on was, at the very same moment that this was happening, she had studied for a science test for weeks. She loved school, she was an intellectual, and she studied for that science test and she went in and took the science test and she got an ‘A.’ This young, White girl in the class went up to the teacher, jealous, and said, ‘Ms., Delores cheated on that test.’ The teacher called Delores up and gave her a big, red letter ‘F’ after she had given her an ‘A.’ She never questioned her, but she just said, “There’s no way that you could have gotten an ‘A’ on a science test.” And then after that, we were called to the nurse’s office, so it was a double-whammy.

“But here’s how the story ends. It was that moment that made her want to be a teacher and she wanted to be a teacher because she said, ‘I don’t want to be like that teacher. I want to instill in my students the love of learning and I want to instill in them a passion for wanting something better for their lives.’ After that moment, she was so devastated, that that’s what came out of that [experience].

“I look back at those two little Black girls — 9 and 10 — and I think, ‘That is the story of Black women.’ In the midst of the crisis, the midst of the storm and the midst of people turning you down and telling them that their ugly and telling us, whatever … anything negative … that we can triumph from that and be a vessel of hope. That is God-given and we are blessed to be able to dream so big. And that’s really all I have to say.

“I pray, but also, I feel like when you pray, God puts people in your life that lead you when you can’t lead yourself. I’m lucky enough to have representatives that see me. They say that in Africa, in the greetings, when they say, ‘Hi, how are you?,’ [the person responds], ‘I’m fine … and I see you.’ Barry, Estelle and Michael, [her team] you always have seen me. You know my heart, you make me feel pretty, Estelle, you do.

“I realize that you can’t do it alone. I thank you for this honor. I’m thankful that you are somehow touched by my work because I feel like I did dream big. I dreamed the biggest dream that I could find and I feel so blessed to have planted any seed of inspiration in any of you. You have just made it all worthwhile. Thank you very much.”

Meet Channa, who attended ESSENCE’s Black Women in Hollywood event, and the other lucky ladies who have learned how to be red-carpet fabulous, thanks to L’Oreal Paris Academy.