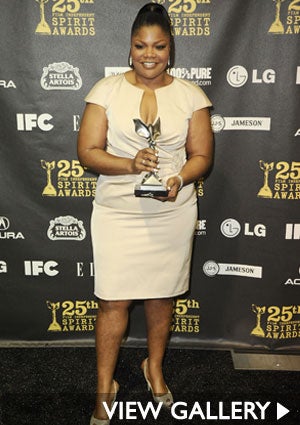 Last night, Hollywood saluted the free spirits of the independent film industry and not surprisingly, “Precious: Based on the Novel ‘Push’ by Sapphire” was the biggest winner. The film won in each of its categories starting with the Best First Screenplay award for Geoffrey Fletcher. “As a screenwriter, it’s such an honor to have your pages populated by such brilliant artists,” he began, “and every time I think of them, I become an audience member again.”
That was just the beginning… Following Fletcher’s win, Mo’Nique earned top honors in the Best Supporting Female category, but things really heated up when Gabourey Sidibe‘s name was called for the Best Female Lead Award. The crowd rose to their feet to show their love for the budding actress. Later, Daniels addressed her and said, “Momma Gabby, you won! You showed them what time it was, right?” After hugging his cast, director Lee Daniels literally ran to the stage to accept his award for Best Director. “I’ve waited a long time to be here, but this was a collaborative effort.” He went on to thank his cast and crew, by name, and by the time the film won Best Feature, the no-holds-barred director was nearly without words. Next up are the Academy Awards on Sunday. Now that Mo’Nique has won every accolade that’s been bestowed upon her, might she have her Oscar speech prepared? Not at all. Why? “I think the universe would say, ‘You have a lot of nerve,'” she said with a big laugh.
Read more: