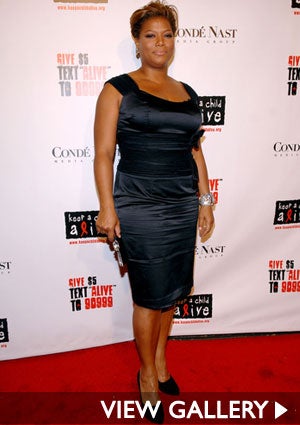 When the beautiful Queen Latifah debuted her feminist rhymes, the New Jersey native ushered in a regal look that was the anti-thesis of what most women in hip-hop we’re wearing at the time. Queen Latifah stayed away from skimpy dresses, overly hard tomboyish looks and the ubiquitous gold chains. Her name alone, sans the MC prefix, hinted to us that this female rapper was an original and not just a female version of what men want to hear and see. To further drive home that point, Queen Latifah adorned herself with crowns and Afrocentric jewelry, and wore a uniform of various black military inspired suits with flat ridding boots. As her exceptional career evolved over the years from rapper to singer to Oscar-nominated actress to model to philanthropist, so has Queen Latifah’s personal style. This natural style growth found a confident Queen Latifah doing away with covering her beauty up and opting instead for figure-hugging clothes that show off her plus-size frame. Once again, the Grammy Award-winning performer has become a source of style inspiration for all women, especially plus-size gals who believed their bodies were not fashionably “in.” The Queen earned her fashion stripes by knowing how to accentuate her sexy curves with ensembles that cinch in at the waist, choose clothes that fit her body right and play with vibrant colors that complement her golden complexion. Most importantly, Queen Latifah sticks with looks that work for her as opposed to jumping on the trend bandwagon. This renaissance woman is a great believer in details like crystals, asymmetric necklines and strapless silhouettes to inject some Hollywood glamour into her red carpet looks. No matter what size you are, these are timeless fashion principals to live by. Let Queen Latifah show you how it’s done in our round-up of the Queen’s most to-die-for looks. Read more: