He’s been making movies for over 30 years (and earned two Academy Awards nods along the way) and on Saturday night, Spike Lee took home the golden statue—finally. Denzel Washington, Wesley Snipes and Samuel L. Jackson were on-hand to present the award and also, share in the moment with him.

Along with screen legends Debbie Reynolds and Gena Rowlands, Lee was awarded an honorary Oscar at the 7th Annual Governors Awards. Motion Picture Academy President, Cheryl Boone Isaacs, kicked off the festivities by sending love to Paris and speaking about the ongoing need for diversity within the Academy as well as throughout the film industry. Then she asked for everyone inside of Hollywood’s Dolby Ballroom to raise their glasses as she toasted the night’s honorees. 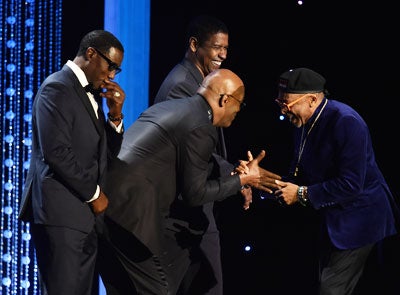 Along with Washington, Snipes and Jackson—the latter two whom appear in Lee’s much whispered-about film, Chi-Raq (December 4)—the guest list was overflowing with everyone from Idris Elba, Will Smith, Ice Cube and Common to F. Gary Gray, John Singleton, Ava DuVernay, Ruth E. Carter, LaTanya Richardson and actor John Turturro, whom Lee called, “one of Brooklyn’s finest.”

Sporting orange frames, with socks to match, and his Oscar Edition Air Jordan VI Gold Leaf sneakers, Lee had his notes ready and didn’t mince a word, of course. During his nearly-20 minute speech, the Atlanta-born, Brooklyn-bred filmmaker spoke of his journey — as both an artist and a man. Of his early college days (he’s a proud, third generation Morehouse College graduate), he admitted that after being a lackluster student, “film found me,” during the summer of 1977. He also shared the lesson he learned, early, one which he tries to impart on young people. “Nothing happens overnight,” he said, matter-of-factly. “There is no such thing as an overnight success. You have to bust your ass, roll up your sleeves and attack, attack, attack, attack…”

Lee also didn’t shy away from the issue of diversity in Hollywood. “We can talk, you know, yabba, yabba, yabba, but we need to have some serious discussion about diversity, and get some flave up in this!” he said. “This industry is so far behind sports, it’s ridiculous,” he continued. “It’s easier to be president of the United States as a Black person than be head of a studio. Honest.”

Lee, a tenured professor at NYU Film School, his alma mater, acknowledged those who’ve supported and encouraged him along the way, too, including his grandmother, who saved up her social security checks and put him through college and film school and later, gave him the money for his thesis film and for She’s Gotta Have It, his late mother, his father, his wife, Tonya Lewis Lee, his children, siblings and teachers. He also acknowledged Boone Isaacs, twice, for her efforts to push the diversity movement forward. Actually, he thanked her for “trying to bring some flavor up in here!”

Before leaving the stage, he shouted out — “Is Brooklyn in the house?” — and the room roared.