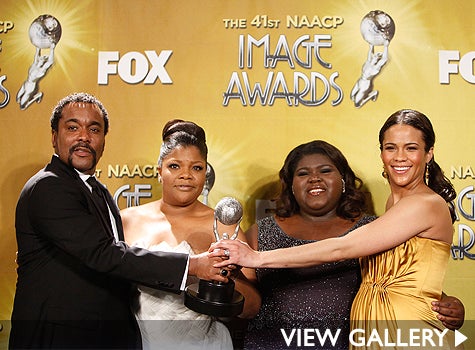 Our best and brightest turned out for the 41st Annual NAACP Image Awards.  “Precious: Based on the Novel ‘Push’ by Sapphire” was clearly the top winner, but the night belonged to newcomer Gabourey Sidibe–hands down!
As expected, Sidibe won the Outstanding Actress in a Motion Picture Award and after sashaying to the stage (and exchange love taps with presenter, Chris Rock), she stood before the mic and began with, “It is an honor to be nominated, but it’s so awesome to win!”  She went on to thank, and dedicate her award to, “all the Precious girls out there.”  In addition to her win, her co-star, Mo’Nique won for Outstanding Supporting Actress, director Lee Daniels won for Directing and screenwriter Geoffrey Fletcher won for Outstanding Screenplay.  The film also won for Outstanding Indie Film and Outstanding Motion Picture.
The NAACP also awarded special honors to a handful of our most prominent players including Tyler Perry (Chairman’s Award), artist/philanthropist Wyclef Jean (NAACP/Ford Vanguard Award) as well as Former White House Advisor, Van Jones (President’s Award). Additionally, music industry “godfather” Clarence Avant was inducted in the Hall of Fame.
Rounding out the night’s winners were Maxwell who won for Outstanding Male Artist and received a heartfelt, standing ovation from the audience as well as Mary J. Blige, winner for Outstanding Female Artist and Outstanding Album. Co-Host, Hill Harper, earned the award for Outstanding Actor in a Drama Series while Lance Gross won for Outstanding Supporting Actor in a Comedy Series. The family series, “Lincoln Heights,” which, sadly, will sign off this year after four seasons, won for Outstanding Drama Series. Also, it seems that Steve Harvey’s message has resonated as his 52-week New York Times bestseller, “Act Like a Lady, Think Like a Man,” was honored with the Outstanding Literary Work (Instructional) Award.
And though Lee Daniels acceptance speech ran waaaaay over, it was still great to hear Mary Mary close the show with their powerful, Image Award-winning single, “God in Me.”
A good time was had by all.
Read more: