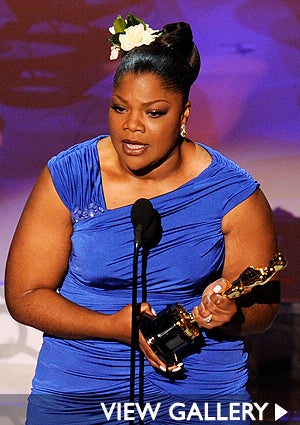 It’s official–Mo’Nique is an Academy Award-winning actress. After months of anticipating (and keeping our fingers tightly-crossed in her honor), Mo’Nique won the Best Supporting Actress Academy Award for her role in “Precious: Based on the Novel ‘Push’ by Sapphire.” She follows in the footsteps of first time-winner Hattie McDaniel as well as Whoopi Goldberg and Jennifer Hudson whom, before tonight, were the only Black women to have won in the supporting category. After her name was read from the envelope, Mo’Nique took a deep breath, kissed her husband, Sidney Hicks, and her co-star Gabourey Sidibe and then took a slow walk to the stage where she delivered a powerful, touching speech. “First, I would like to thank the Academy for showing that it can be about the performance and not the politics,” she began. “I want to thank Ms. Hattie McDaniel for enduring all that she had to so that I would not have to; Tyler Perry and Oprah Winfrey because you touched it, the whole world saw it.” She went on to thank “My entire BET family, my ‘Precious’ family, thank you so much. To my amazing husband, Sidney, thank you for showing me that sometimes you have to forego doing what’s popular in order to do what’s right and baby, you were so right. God bless us all!” Look through Mo’Nique’s life in pictures. Mo’Nique has been the toast of Tinseltown since audiences first witnessed her chilling portrayal of Mary Jones when “Precious” hit theaters last November. As the nominations (and wins!) began rolling in–from the Golden Globe and SAG to the BAFTA, NAACP Image and Independent Spirit Awards–the Oscar buzz became deafening. By the time the Oscar nominations were announced on February 2, her momentum seemed unstoppable.
Oh, what a night! Read more:

“We’ve been best friends for over 25 years and we truly know who we are,” Mo’Nique explains. “Often times, people get into marriages and they don’t know who they’re laying next to. I’m very comfortable and secure with my husband.”

“It’s about loving. Learning to love yourself. Really learning to embrace who you are because Precious has learned to love herself. I think that we are all Precious. “