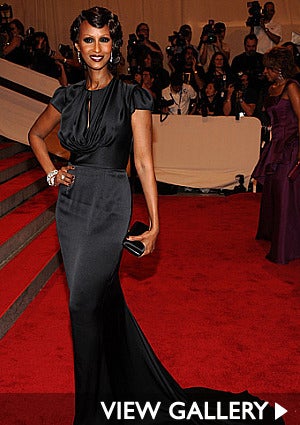 The Metropolitan Museum of Art’s Costume Institute Ball is one of the biggest social events of the season in New York City. This year was no exception; the co-hosts were Oprah Winfrey, Vogue’s Anna Wintour and Patrick Robinson, the Executive Vice President of Global Design for The Gap. It was like spending the evening in a red carpet, wonderland with the stars of film, music and fashion. Desiree Rogers made her first major appearance since stepping down as White House Social Secretary and Lady Gaga performed, this was the main event. Literally everywhere you looked, there was a celebrity: Janet Jackson, Mary J. Blige, Usher, Zo Saldana, Tom Ford, Joy Bryant, Pharrell Williams, Kerry Washington, Justin Timberlake, Jennifer Lopez, Iman, Michael Kors, Naomi Campbell, Sean “Diddy” Combs, Marc Jacobs, Chanel Iman, Viola Davis, Anthony Mackie and the list goes on and on. One of the highlights of the evening–and there were many like the photo taken with Mayor Michael Bloomberg, Diane Taylor, Erana Stennett and I as we were leaving the Ball–was chatting with Zo Saldana, Joy Bryant and Iman and realizing that these are two of our bloggers for ESSENCE.com. That was haute! Each year, The Met curates an exhibition celebrating a cultural or societal movement, theme or style icon that has made significant impact on the world of fashion and popular culture. In the past they have paid homage to “Chanel,” “Jacqueline Kennedy: The White House Years,” “Superheroes: Fashion and Fantasy,” and “Rock Style.” This year, the theme is “American Women: Fashioning a National Identity.” The exhibit looks at the way women have dressed throughout history–a sign of the times, so to speak. At the end of the gallery there is a photomontage of historical images of President Barack and Michelle Obama dancing at the Inauguration, Beyonce and more. Lenny Kravitz’s “American Woman” is the soundtrack. When I heard this year’s theme, I immediately thought of First Lady Michelle Obama and the millions of Black women we speak to at ESSENCE and ESSENCE.com everyday. African-American women have a personal style that is all their own. Many of them work everyday, raise children, run households and have social and community responsibilities–church, club groups, mentoring, PTA and sororities. Black women don’t follow the rules they remix them. So it was amazing to see so many sisters at The Met this year. Oprah Winfrey looked fabulous in her navy Oscar de la Renta gown, with clean make-up and dramatic eyes and thick curly hair. Mary J. Blige wore an elegant peach colored chiffon evening gown with her ash blonde short cut. Joy Bryant looked like a fairy princess in a cream Marchesa gown with tulle trim, pale pink lipstick and her hair in a sophisticated bun. Iman looked stunning in a black satin dress with Marcel waves and rich, dark plum lipstick. Chanel Iman kept it young and sexy in a gold metallic jumpsuit and ’70s inspired hair and makeup. There are no rules for women today–especially Black women. They dress as a way of expressing themselves because their style is their story. To read more Emil Wilbekin’s “Emil’s Email” stories, click here.