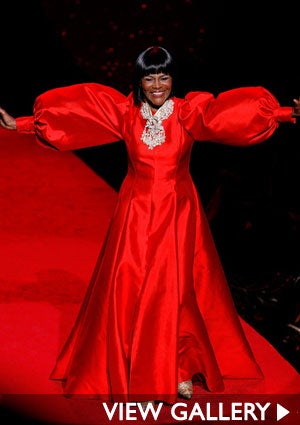 The third annual Black Women in Hollywood luncheon honors African-American women in Hollywood who help to transform images of Black women in television and film. This year’s event, held the Thursday before the Academy Awards, will also commemorate ESSENCE Magazine’s 40th anniversary. Black Women in Hollywood honorees include actresses Zoe Saldana, Gabourey Sidibe, Queen Latifah and the enchanting Cicely Tyson. Thespian Cicely Tyson has always marched to the beat of her own drum. As a stage, film and TV actress, Tyson defied Hollywood conventions by challenging the industry’s portrayal of Black women in film. Tyson chose only the roles that offered up positive images of Black women. Her aversion to playing the stereotypical mamy characters in the latter part of her career may not have landed her many parts, but Tyson’s stellar acting chops would earn her three Emmys, an Academy Award nomination and a reputation as one of the finest American method actors. In addition to challenging Hollywood, Tyson also rebelled against standards of beauty for Black women. The former model, who was discovered by the fashion editor at Ebony, refused to whitewash her look. A stunning Tyson was revered by Black women for wearing her hair naturally. She sported cornrows on and off-screen at a time when the hairstyle was considered demeaning and was closely associated with the images on film of poor Blacks in the south. Tyson singlehandedly removed the taboo linked to this hairstyle and inspired many women to take pride in their natural beauty. Off-screen Tyson has always been a vision of sophistication in ensembles that show off her personal style, love for the unexpected and her discerning eye for putting looks together. For Tyson, her age does not define her fashion sense. We’re inspired by her willingness to continue to push the envelope when it comes to style. At the recent 41st NAACP Image Award, Tyson wore an elegant black pantsuit with a bow blouse in a sea of LBD’s and full on gowns. At New York Fashion Week the actress looked amazing walking in the Heart Red Truth runway show in a glamorous B. Micheals gown with balloon sleeves. ESSENCE will honor the style icon on March 4 at the Essence Black Women in Hollywood luncheon with a Legend Award celebrating her contributions in breaking barriers for African-Americans. We can’t wait to see what she will wear to the big event! Until then, browse through some of Cecily Tyson’s singular looks for inspiration. Read more: