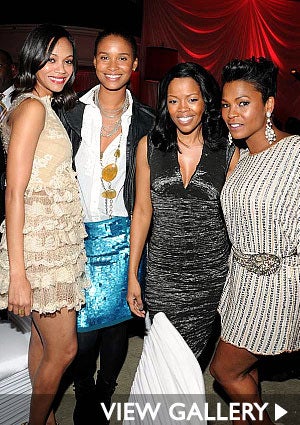 “What a room,” Laurence Fishburne noted three times, with feeling, as he looked out into the audience at the Third Annual ESSENCE Black Women in Hollywood Luncheon yesterday. Fishburne was on-hand to present Cicely Tyson with the Legend Award, but first, he marveled at the bevy of beautiful, talented women who filled the Crystal Ballroom at the Beverly Hills Hotel. The star-studded event honored the achievements of five of our most-treasured artists including Gabourey Sidibe, Zoe Saldana, Mary J. Blige, Queen Latifah and legendary actress, Cicely Tyson. The guest list was hefty, too–think Jada Pinkett-Smith, Taraji P. Henson and directors Lee Daniels and James Cameron to Joy Bryant, Common, Nia Long, Anika Noni Rose and Paula Patton, to name a few. Before the program got into full swing, our Beauty & Cover Director, Mikki Taylor, who also served as hostess for the afternoon, was brought to tears when she realized that she was the subject of a special tribute. As we embark on our 40th anniversary, Taylor is set to celebrate her 30th year of “fabulousness” at ESSENCE, hence it was only fitting that she be celebrated in grand style. Of our five honorees, newcomer Gabourey Sidibe was the first to receive her award for Best Breakthrough Performance, which was presented to her by her “Precious” director, Lee Daniels. Sidibe, who is up for Best Actress at the Academy Awards on Sunday, was humbled  to be recognized by so many whom she’s admired and spoke of the joys of being embraced in a town where she never thought she’d be accepted. Next to the stage was Viola Davis and Fishburne, who both happily presented the Legend Award to Cicely Tyson. The entire ballroom rose to their feet as the trailblazing actress walked to the stage, donning a fresh-flower headpiece, and delivered a moving acceptance speech in the form of a monologue. “Cicely Tyson is a movie,” Queen Latifah later said, with admiration. There’s no doubt that Tyson paved the way for every actress in the room, something which Zoe Saldana spoke of, between tears, after “Avatar” director James Cameron presented her with the Star to Watch Award. After thanking her close-knit circle of family and friends for their constant support, she reflected on how much Tyson’s influence was a part of her upbringing. She even shared that her sister was named in the actress’s honor. After Mary Mary belted out “Can’t Give Up Now” in honor of Songstress of the Year honoree, Mary J. Blige, last year’s Black Women in Hollywood honoree, Taraji P. Henson went off-script to explain just how much Blige’s music has healed and moved her over the years. The room was filled with both laughter and tears as Blige recounted her bumpy journey to success and gave praise to fellow honoree Sidibe, whom she credited as her new, personal hero. And last, but certainly not least, was Queen Latifah, our Power Award honoree. A very misty Jada Pinkett-Smith–who, sadly, lost her father last week–presented her friend with a shot-on-the-city-street video presentation which featured everyday folks expressing why they love Latifah, from her early music and dance moves to her fearlessness and artistic growth. “I don’t get to see her a lot,” Pinkett-Smith added, “but she’s my girl!” By the time Latifah stepped to the microphone to speak about the importance of giving back and her constant mission to “change and grow and create,” there wasn’t a dry eye in the house. Her inspiration was contagious. Although our plan was to pay homage to five of our brightest stars, it seemed that each of our guests walked away feeling energized, with a renewed sense of purpose and a desire to continue on their chosen paths. We couldn’t have asked for more. Read more