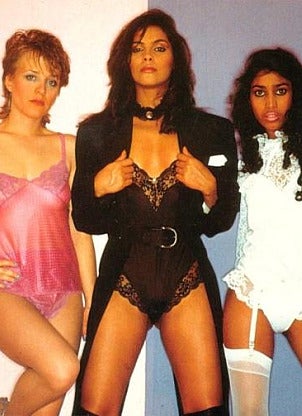 Watching the Spring 2010 fashion shows, where Crayola-striped eyeshadow, morning-after hair, and lingerie-inspired frocks paired with men’s blazers ruled the runways, we couldn’t help but get nostalgic for ’80s sex symbol Vanity. Back in the early ’80s, the model/actress/singer played with the whole masculine-meets-feminine, dominatrix-meets-ingenue thing long before Gaga and Rihanna thought to leave the house sans pants. As the story goes, when Canadian-born model Denise Matthews met Prince in 1982, he re-named her “Vanity” because he saw his female reflection in her face (o-kaaay). Smitten, he made her the lead singer of his group, Vanity 6, but after one album and an utterly classic, sleazy-good hit, “Nasty Girl,” she left him, the group and a starring role in “Purple Rain.” After signing with Motown and vamping through films like “The Last Dragon” and “Action Jackson,” she fell victim to a career-killing cocaine addiction. These days, the born-again Christian is totally clean and working on an autobiography called “Blame it on Vanity” that we’re just itching to read. To rock your own “Nasty Girl” moment at home, accentuate eyes with Josie Maran Natural Wonders Powders Palette ($35), an ’80s-ish collection of teal, gold, apricot, midnight blue and copper brown eyeshadows; smudge on Benefit Bad Gal Eyeliner in Extra Black ($20); and post-blowout, spritz your roots with Oscar Blandi Volumizing Spray ($18) to copy her just-rolled-out-of-bed, sexily mussed mane. Read More: