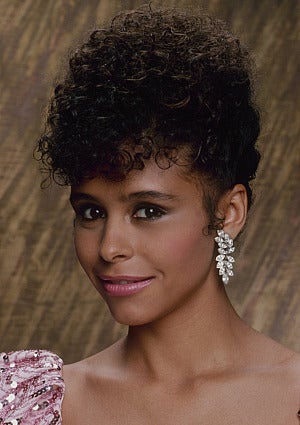 In the mid-’80s, actress Troy Beyer was one of the most beautiful, in-demand actresses of the era. Known for her gorgeous curls and chestnut brown doe eyes, the actress became famous playing Diahann Carroll’s daughter, Jackie Deveraux, on “Dynasty.” But her career didn’t begin — or end — with this uber-glamorous, high-profile role! Born in 1964 to a Black mother and Jewish father, Beyer actually began her career at age four with a role on “Sesame Street.” After studying acting at City University of New York’s School for the Arts, she made her debut in Frances Ford Coppola’s “The Cotton Club,” which landed her the role on “Dynasty.” The award-winning actress co-starred in movies with the likes of Whoopi Goldberg, Kenneth Branagh and Robert Downey Jr — and in the ’90s, she parlayed her acting success into a career as a director, working on features like “Love Don’t Cost a Thing” and “B.A.P.S.” Today, Beyer is a self-help author who appears regularly on “The Steve Harvey Morning Show.” We salute this beautiful woman who’s not afraid to reinvent herself!