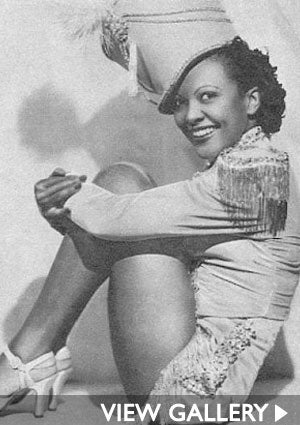 With the Golden Globes almost upon us (go Monique and Gabourey!), we couldn’t help but think back to Theresa Harris, a pioneering black actress who, though wildly gorgeous and talented in spades, never quite achieved the industry respect she was due. Born in Texas in 1906, the stunning singer/dancer/actress broke into films as an extra in the 1930 Marlene Dietrich classic, “Morocco.” Soon, she was stealing scenes from Hollywood’s most famous stars–everyone from Mae West to Barbara Stanwyck. Even though most of her on-screen characters were servants, Harris never passed up an opportunity to flaunt her glamorous side. In one way-ahead-of-its-time scene in 1933’s “Professional Sweetheart,” Harris plays a maid who shows an unsophisticated Ginger Rogers how to be sexy (she teaches her the hottest new dance steps and, a few scenes later, Rogers begs her horrified boyfriend to take her to Harlem). Like most black performers in 1930s/1940s Hollywood, Harris was never given a chance to play much more than the stereotypical maid, waitress and “hot-blooded native” roles, so in the ’50s, Harris retired from the movies. Her roles may have been small, but her presense was huge–because of her tenacity, and the elegance she brought to even the most poorly drawn characters, actresses like Halle Berry and Kerry Washington are able to shine. Hats off to you, Theresa Harris.

Check out some of our favorite vintage chic products, inspired by this fearless,1930s glamour girl.