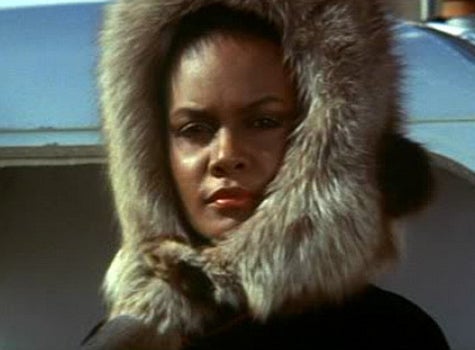 When remembering blaxploitation movie heroines, most of us immediately think of Pam Grier in “Foxy Brown,” but she wasn’t the only jive-talkin’, pistol-packin’ mama vamping her way through the 1970s action flicks. “Cleopatra Jones” star Tamara Dobson was one of the genre’s sexiest, most celebrated stars. Drop-dead gorgeous, ultra-sassy and unimaginably tall (the film’s tagline was “She’s 6 feet 2 of dynamite!”), Dobson was a successful high-fashion model, gracing the pages of Vogue, Mademoiselle, Redbook and ESSENCE, before making the transition to films at 28, in 1972’s “Fuzz.” But it was her leading role in “Cleopatra Jones” that would make her an icon! In the 1973 film, Dobson played a fabulously stylish special agent who, for murky reasons, storms up a sand dune and orders the destruction of a Turkish poppy field. But the plot is neither here nor there — the film is worth seeing just for Dobson’s ultra-glam ensembles (how about that fur headwrap?) and girl power fight scenes! Dobson went on to star in a few more films, including “Cleopatra Jones and the Casino of Gold” and the women’s prison cult classic “Chained Heat,” and in 2007, she was included in a special tribute to the blaxploitation genre at the 79th Academy Awards. Dobson died in 2006 after a long battle with multiple sclerosis, but we’ll always remember the stunningly gorgeous actress for her fabulous contribution to Black cinema!