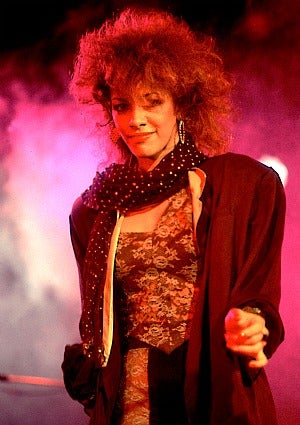 Okay, okay, we know legendary percussionist/singer/actress Sheila E. is Latina, but in our book, she still qualifies for an ESSENCE.com Vintage Vamp! Not only did she help revolutionize Prince’s sound with her spectacular drumming on his ’80s albums and tours, she was a star in her own right. And with her teased-to-there curls, high-drama smokey eyes and ruby red lips, she was one of the era’s hottest trendsetters…

Sheila Escovedo was born into a musical family (her father is famed percussionist Pete Escovedo, and three of her uncles played in major bands), and by her late teens, the prodigy was already drumming with Lionel Richie, Marvin Gaye and Diana Ross. in 1978, a teenaged Prince met her at a gig and decided she’d be in his band one day! Five years later, she began playing on the “Purple Rain” recording sessions, and until 1989 she toured in Prince’s various bands, dueted with him (“Love Bazaar” and “Erotic City” are classics), and released three solo albums, including the addictive “The Glamorous Life.”

Over the last twenty years, Sheila E. has been in high demand, collaborating with artists like Phil Collins, Ringo Starr, and Beyonce (she played on 2002’s “Work it Out”), and drawing crowds with her own Sheila E. and the E Family Band. Recently, she performed to a standing ovation at Prince’s sold-out “Welcome to America Part 2” tour—and with her voluminous chestnut curls, diva lashes and va-va-voom figure, the 50-something icon was hotter than ever. Get it, Sheila!