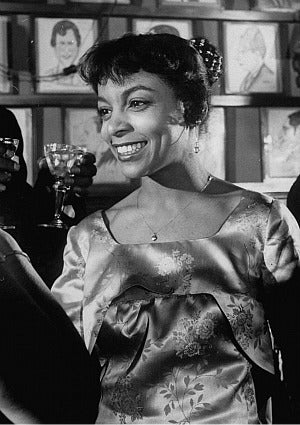 As an actress, playwright, activist and poet, Ruby Dee is one of the most accomplished women of our time. The “Raisin in the Sun” star has won an Emmy, a Grammy, a SAG award and was a recipient of the 2004 Kennedy Center Honors (along with her late hubby, the glorious Ossie Davis), but this Delta soror is also a great beauty. With her soft curls, luminous eyes and flawless style, Dee has always been the epitome of a classy lady. The Harlem native began acting as a teenager and made several appearances on Broadway before landing her first film role at 25 in 1950’s “The Jackie Robinson Story” — and she never looked back. Over the next eight decades, Dee appeared in countless acclaimed movies like “A Raisin in the Sun” and “The Incident,” several stage productions, and has enjoyed a slew of brilliant roles on television (she has eight Emmy nominations to show for it!). While having successful acting careers, Dee and her husband Ossie Davis made time for rights activism. They were both friends with Martin Luther King and Malcom X (Davis gave the eulogy at his funeral), and as members of NAACP and the Congress of Racial Equality, they devoted their lives to fighting for civil rights. For their work, Dee and Davis were awarded with the 2005 Lifetime Achievement Freedom Award, presented by the National Civil Rights Museum in Memphis, TN. With her brilliance and beauty, Ruby Dee is an inspiration to us all. We thank her for touching our lives with her greatness!