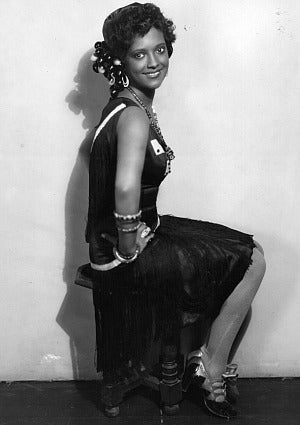 In 1920s Hollywood, films were silent, flappers were the rage, and the major movie goddesses of the day were white… with one notable exception: Nina Mae McKinney. The outrageously gorgeous, exceedingly talented triple threat set hearts racing as the saucy star of 1929’s “Hallelujah!,” the first all-Black film musical. On the strength of that scorching-hot performance alone, movie magazines and critics began calling her “Black Garbo…” Born in 1913, the South Carolinian moved to New York as a teenager and quickly made a name for herself as a dancer. Hollywood director King Vidor spotted her dancing in “Blackbirds of 1928,” and cast her as the female lead in his first sound film, “Hallelujah!” (for which he was nominated for the Best Director Oscar in 1930). In the film, she played Chick, a teenage seductress who famously danced the “Swanee Shuffle,” a sexy little number that shocked audiences and instantly propelled McKinney to pinup status. With her spit curls, huge brown eyes and flirty smile, a star was definitely born. The new star landed a five-year contract with MGM, but sadly, the studio had no idea what to do with a Black sex symbol. After a decade spent playing maids and waitresses, McKinney moved to Europe where she found success touring in cabaret shows and musicals. In 1967, the still-dazzling singer/dancer/actress died of a heart attack, but we’ll always remember her for her boundary-busting contribution to American film — and her impeccable style!