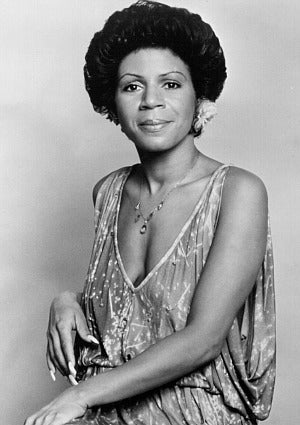 Seventies chanteuse Minnie Ripperton was famous for her five-and-a-half octave range and her 1975 hit, “Lovin’ You,” but she also happened to be one of the loveliest singers of the era, with a fabulous, effortlessly chic bohemian style. With her signature flowers-in-the-fro ‘do (the flower of choice was usually baby’s breath) and earthy-cool style, she was as gorgeous as she was talented… Ripperton got her start in the business as a teen on Chicago’s southside, when she sang lead vocals for a local girl group, The Gems. The group didn’t take off, but she was noticed by infuential Chess Records, who hired her to sing backup for some of the top artists of the ’60s and early ’70s, like Etta James, Chuck Berry, Muddy Watters and Ramsey Lewis. In 1974, she finally landed a solo record, “Perfect Angel” and scored an international smash with “Lovin’ You.” In 1976, Ripperton was diagnosed with breast cancer and became the spokesperson for the American Cancer Society. Tragically, she died from the disease three years later, leaving behind her husband, producer Richard Rudolph, and two children; music engineer Marc Rudolph and “Saturday Night Live” comedienne/actress Maya Rudolph (if you’ve ever heard her sing on an SNL skit, it’s clear the apple didn’t fall far from the tree!). During her short life, Ripperton touched us with her stunning voice and uniquely chic style and beauty. Minnie, we’ll never forget you!
Loading the player...