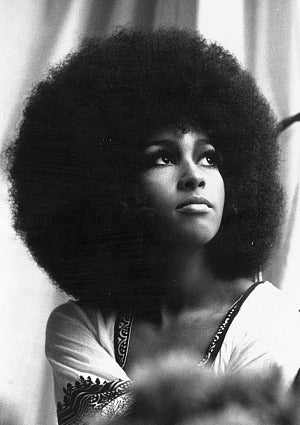 In the late ’60s, few afros were as powerfully majestic as Marsha Hunt’s.

The Philadelphia-born sex symbol first made a name for herself in London, where she starred in the British production of “Hair.” Burning up the stage in skintight buckskin pants, belly-baring halters and that awe-inspiring cloud of hair, she instantly became the toast of Swinging London.

After posing nude for the cover of British Vogue’s January 1969 issue, Mick Jagger came a-calling, and the two embarked on a passionate affair. The relationship ended in less than a year, but it spawned a daughter, Karis (Jagger’s first and Hunt’s only child), and the iconic Rolling Stones song, “Brown Sugar.”

After a decade of modeling, acting, and singing, Hunt became a writer, penning a handful of novels and memoirs, including “Repossessing Ernestine: A Granddaughter Uncovers the Secret History of Her American Family,” a recount of her search for her father’s mother, a blonde-haired, blue-eyed free Black who was mysteriously banished to an asylum for 50 years (it’s a great read!).

In 2004, Hunt was diagnosed with breast cancer, and after a complete mastectomy, she celebrated her survival by recreating her 1969 cover pose for British Vogue.

A great beauty and a survivor, Marsha Hunt is the very definition of a Vintage Vamp!