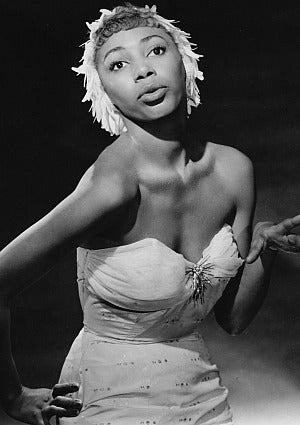 Josephine Premice was many things; a Tony Award nominee, a dancer, a singer, a mother, and, by marriage, a true-blue Upper East Side socialite — but above all else, she was a truly powerful, drop-dead-gorgeous pioneer who broke boundaries with elegance, wit and charm. As a little girl in 1930s Brooklyn, Haitian-American Premice studied dance with Martha Graham and Katherine Dunham — and at 20, she began her career in a production of “Blue Holiday” starring Ethel Waters. Officially bit by the showbiz bug, Premice went on to sing, dance, and act her way through a flurry of Broadways hits, including “A Glass Menagerie,” “Bubbling Brown Sugar,” and the Balanchine-choreographed “House Of Flowers,” which co-starred her lifelong BFF, Diahann Carrol. Her performances were so vibrant that a New York Times critic once wrote that “Ms. Premice can almost make a feather boa come alive!” In 1958, Premice famously married the White, blue-blooded socialite Capt. Timothy Fales, and became one of the reigning socialites in New York — a jaw-dropping feat at the time. After her death in 2001, Premice’s daughter, television writer/producer Susan Fales Hill, wrote an autobiography about life with her uber-glamorous, boundary-breaking mother called “Always Wear Joy” (it’s an ESSENCE favorite!). Premice was truly a fierce and fabulous woman, and we salute her!