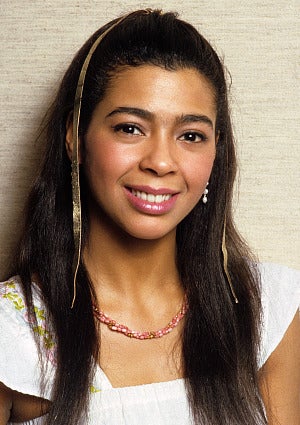 For a glittering stretch in the late ’70s and ’80s, Irene Cara was one of the most popular entertainers in the game! The Oscar-winning singer/dancer/actress set the world on fire with her international hits “Fame” and “Flashdance: What a Feeling,” and personified ’80s cool with her personal style: hair galore, statement hair accessories, thick brows, pink lipgloss and off-the-shoulder mini-dresses. Born to Afro-Puerto Rican/Cuban parents in 1962, the child prodigy performed on Spanish language television shows, was a regular on PBS’s “The Electric Company,” and appeared in a handful of Broadway shows. As a teen, she played Sparkle, an innocent romantic in a 1950s girl group in the classic film “Sparkle,” which led to her iconic role as Coco in 1980’s “Fame.” She sang the title song and “Out Here On My Own,” both of which became Oscar-nominated smashes. Three years later, she won the Best Song Academy Award for “Flashdance: What a Feeling” — a song that still makes us want to put on a ripped sweatshirt and dance for our lives. She toured extensively through the ’90s, and recorded a few dance hits in Europe, and these days she’s working with her new band, Hot Caramel. Irene was a fierce, fabulous performer and her music and films are just as fresh today. Take your passion and make it happen!