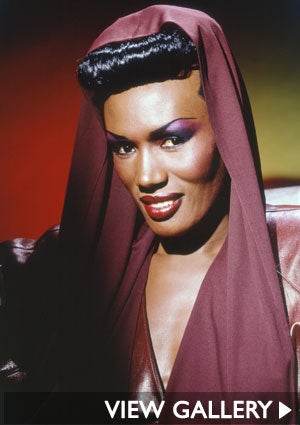 Born in Jamaica in 1948, the long, lean, chocolate-skinned Jones took the fashion world by storm as a 1970s supermodel–but soon, her unforgettable voice took center stage. Inspired by everything from David Bowie to reggae, Jones became a 1980s dance music diva, releasing albums like “Nightclubbing” and “Slave to the Rhythm.” The era’s top tastemakers were drawn to Jones’ to-the-max personal style (ie, the unisex flattop haircut, veil fetish, and alien-on-safari ensembles) and she became a muse to the likes of Andy Warhol, Basquiat and wildman designer Thierry Mugler.

In the 1990s, she left a permanent mark on pop culture with her turn as over-the-top supermodel Strange in Eddie Murphy’s “Boomerang” (if you haven’t seen it, please hit YouTube for the scene where she gives birth to her signature fragrance in a commercial). Grace Jones is a legend, a major beauty icon, and we love her. Strange!

Here, we compiled some of our favorite Grace Jones images, and beauty products inspired by her look. Check it out.