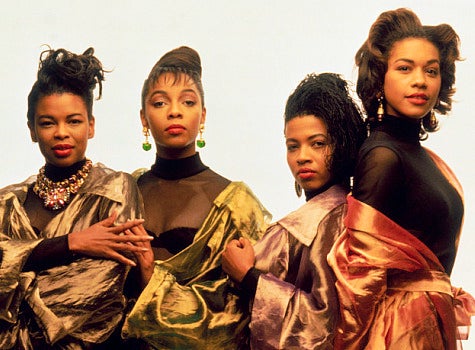 The other day, we caught the “My Lovin’ (You’re Never Gonna Get It)” video on VH1 Soul, and we’ve been knee-deep in En Vogue nostalgia ever since! Really, who was more glamorous than Dawn Robinson, Terry Ellis, Maxine Jones and Cindy Herron in the Nineties? Sure, the R&B goddesses managed to sell over 20 million albums worldwide, win a zillion awards (including AMAs, Soul Train Awards, and a record-breaking seven MTV Video Music Awards), and spend a total of 2,800 weeks on the Billboard charts–but it’s their look that has us misty-eyed! In an era where female musicians were either gangsta-boo tough (SWV, Excape, Da Brat) or overly sexed-up (hello, Lil Kim!), En Vogue was a throwback to old-school glamour. Taking cues from iconic style goddesses like Diana Ross, Diahann Carroll and Dorothy Dandridge (did they have a thing for “D’s?”), En Vogue’s signature beauty look was about a strong, filled-in brow; a swoop of cat-eye liquid liner; and matte red lipstick. Their retro-glam look reached its zenith in the sublime video for “Giving Him Something He Can Feel,” where the ladies performed for a club of fawning men in slinky scarlet dresses, serious mascara and flawless fire-engine-red lipstick. Perfection! Last year, for their twentieth anniversary, En Vogue reunited and performed at the 2009 ESSENCE Music Festival. Here’s to twenty more years of fabulous music…and fierce, glamour girl style!