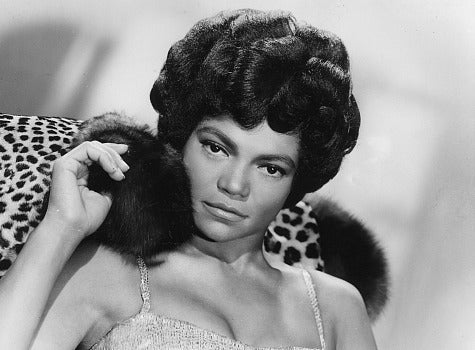 As we count down to the most glamorous night of the year, the Oscar ceremony, we couldn’t help but think of one of the original Hollywood glamour girls, the fierce and fabulous Ms. Eartha Kitt.

Born on a South Carolina cotton plantation in 1927, she began her career as a dancer with the Katherine Dunham Company in 1942, but found her calling as a singer. She recorded a string of hits like “Love for Sale,” “C’est Si Bon,” and Mink Schmink” (many of her songs had a French flair, since she became fluent in the language while touring in Europe as a dancer), and her seductive rendition of “Santa Baby” catapulted her to international stardom.

In the ’50s, legendary director Orson Wells became besotted with her, casting her as Helen of Troy in “Dr Faustus,” which kicked off her career as one of Hollywood’s most in-demand Black actresses. She appeared in films like “Carmen Jones” and “Uncle Tom’s Cabin,” but it was her role as Catwoman on the 1960s television series “Batman” that made her an icon.

For the rest of her career, she always referenced the feline character, draping herself in leopard and tiger skins and adding a sultry “grrrr” to her musical performances. Until she died of colon cancer in December 2008, Kitt was a staple on the cabaret circuit, a living legend, and one of our most enduring sex symbols!