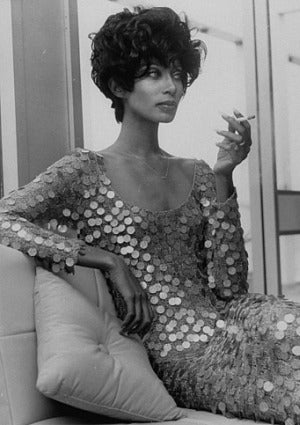 Before Naomi ever graced a catwalk with her slinky strut, before Iman ever dazzled photographers with her devastatingly elegant neck, supermodel Donyale Luna was the reigning Black cover girl of the 1960s. Born Peggy Ann Freeman in Detroit, Luna moved to Manhattan to begin modeling in 1965 and within months, an article in Time magazine declared 1966 to be “The Luna Year” (the piece also described her as “a new heavenly body…unquestionably the hottest model in Europe at the moment”). Luna went on to be the first Black model to land the cover of British Vogue, a muse to legendary photographers like Richard Avedon and David Bailey, and the star of several Warhol and Fellini films. Sadly, she was also a fan of LSD — and died of a drug overdose at 39. Despite her tragic end, Luna will always be remembered for her free-spirited personality and eccentric, outrageously glamorous style. Donyale Luna, you make us want to go out and buy a dress made of a zillion gold paillettes!