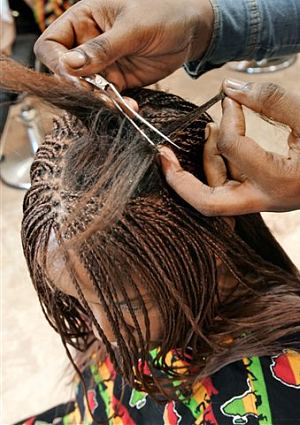 A West African hair braiding salon owner has been sentenced to 24 years in prison for smuggling and forcing girls and young women from his native Togo to work in his salon with no pay, reports Black Voices. Lassissi Afolabi, 47, admitted to illegally smuggling at least 20 workers between 2002 and 2007 with the help of ex-wife Akouavi Kpade Afolabi, using fake visas and making them work as modern-day slaves in salons around Newark and East Orange, New Jersey. The women are said to have suffered beatings, psychological torture and abuse. A judge ordered Afolabi to pay more than $3.9 million in restitution to his victims. “Ironically, from the 16th to the 18th century, when Europeans came to Africa’s shores searching for slaves, Togo and the neighboring region were such hotbeds of slave trading that the area earned the nickname “The Slave Coast,” writes BV’s Lynette Khalfani-Cox. “Sadly, this case shows that slavery apparently remains an issue for both Togo and the United States.”
Loading the player...