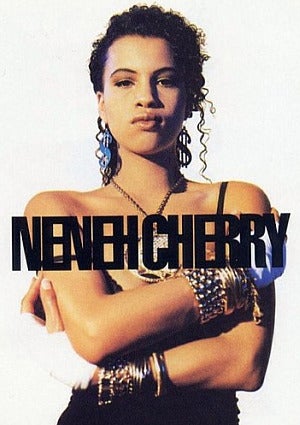 In the late ’80s, hip hop was generally an all-boys club — and the female MCs who broke through tended to be a tad tomboyish (think MC Lyte and a pre-fashionista Queen Latifah). But along came Neneh Cherry, a drop-dead stunning British rapper who challenged stereotypes and broke records with her 1989 smash hit, “Buffalo Stance.” With her bouncy curls, sexy pout and London street kid style, Cherry was one of the first female rappers to cross over to sex symbol-dom… Growing up, the half-Sierra Leonean/half-Swedish Cherry always aspired to be an artist — and at 23, she met and married her musical soul mate, producer Cameron McVey, who produced her international smash album, “Raw Like Sushi.” The album earned her a 1989 Grammy nomination for Best New Artist (she lost to Milli Vanilli) spawned a handful of international hits. These days, Cherry and McVey are grandparents and still travel the world making music with their group, cirKus (their daughter, Lolita Moon, performs with them!). And Neneh Cherry is still one of the most beautiful women in music.
Loading the player...