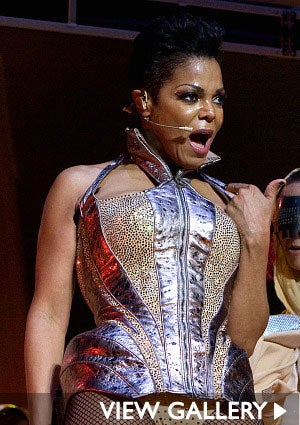 After a full day at the ESSENCE.com Cyber Lounge, we shuttled to New Orleans’ Superdome where Monica kicked off Friday night’s performances. Raphael Saadiq, Charlie Wilson and the iconic Janet Jackson followed Atlanta’s sweetheart for an evening of singing, dancing and a little bit of NSFW. As the introductory act for the evening, Monica sang hits both old and new to the delight of the early crowd. Dressed in all white and backed by a band, the mother of two boasted her trademark alto as she performed cuts like “Don’t Take It Personal” and her newest single, “Everything To Me.” She also sang a Whitney Houston classic to the surprise of a couple in the audience. A gentleman next to me said, “I liked all of her performance, but I especially loved that she sang Whitney’s ‘I Will Always Love You’ and it was really good!” Raphael Saadiq followed, dressed in a white suit and flanked by an eight-piece band, including two keyboardists, two guitarists, a horn section and drums. While performing his lead single “Love That Girl” from his recent Motown-inspired LP “Way I See It,” Saadiq stripped off his suit coat to reveal his muscular tattooed shoulders. “Ladies… I wanna hold you in my arms and squeeze,” he crooned. Then the Oakland, California, native sang a medley of his famous Tony! Toni! Ton! cuts. From “The Blues” to “Let’s Get Down” to “Get Involved” and “Feels Good,” the crowd dancing into and around their seats. Next up was Charlie Wilson, veteran R&B legend and former lead singer of The Gap Band. One fan, Marla, described his performance best: “For his age, he has a lot of energy. He’s 60 something! I just hope Janet can keep up, I saw her on ‘American Idol’ and she was just walking back and forth… she better work it tonight!” Marla wasn’t lying. Charlie gave us 90 minutes, several costume changes — rhinestones included, he sells his own decorated hats, folks — and dance steps with his four dancers. Beginning with “Beautiful,” Mr. Wilson ran through his newer collaborations with artists like Snoop and Justin Timberlake. Then he jumped into classics like “Yearning For Your Love” and “Early In The Morning” before sharing his personal triumph with the ESSENCE Music Festival audience. “I was an alcoholic for 25 years, I was a cocaine addict for 27 long years and then I found someone who picked up and turned me around. Today, I’m 16 years clean and sober, somebody say ‘Yeah!’ I was diagnosed with prostate cancer, I’m cancer free right now! If you’re saved, lift your hands and say ‘Yeah!'” Mr. Wilson ended with “There Goes My Baby” as the crowd swayed with a slow two-step. Saving the best for last, Ms. Janet Jackson closed Friday night’s Superdome performances with an engaging — and steamy — two hour long set. Boasting a five-piece band, three background singers, ten dancers and five costumes changes, Ms. Jackson, clad in a silver leotard with structured shoulders and over the knee boots, showed us who was the boss. Disguised behind a shadowy stage projection, Janet danced her way through “Pleasure Principle” and “Control” before stepping into full view. After “Feedback,” she asked the Superdome patrons if they “wanted more?” which earned a resounding yes. From “You Want This” to “Miss U Much,” Janet pushed through her moves with crisp ease. As she changed into her second outfit, clips of her many television and films appearances (“Good Times,” “Why Did I Get Married Too?”) ran on an expansive screen that stretched across the stage. Returning in a lavender gown with rhinestone-encrusted shoulders, fishnets, glittery stilettos and wrist chains that connected to a sparkling choker, Janet sang “Nothing,” “Come Back to Me” and “Again.” For her third costume change, Ms. Jackson donned a red coat with leather capped sleeves, a black leather top, black pants and a tie. Running through “Doesn’t Matter” and “Escapade,” a distorted Q-Tip video signaled the Joni Mitchell-sampled “Don’t Know What You’ve Got Till It’s Gone.” After a brief break, Janet and her dancers returned in shocking S&M gear — complete with whips, chain, leather chaps, straps and ball gags — and nabbed a lucky man from the audience. As Janet sang in her sultry whisper and fleshtone leotard with black trim, her dancers tied the young man in a restraint vest that even strapped his hands to his waist. Then once the dancers hooked the gent to a pulley, Janet hoisted him into the air, where he hung horizontally. Teasing him within an inch of excitement, Janet gyrated underneath, beside and on top of the nearly drooling man before finally thrusting his face into her cleavage. Only Ms. Jackson could get away with such a risque move and remain a class act. Closing her robust set with “Together Again,” Janet brought a few audience members to tears as the images of her and her late brother, Michael Jackson, rolled on the large screen. Misting up herself, Ms. Jackson sent several kisses to the sky and waved good night to the first night of ESSENCE Music Festival.
Loading the player...