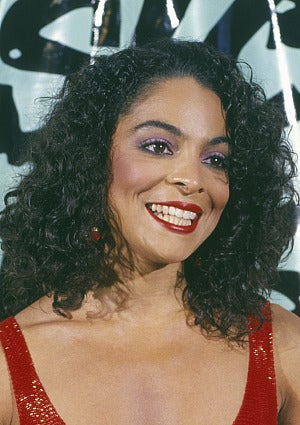 During its run from 1987 to 1993, few shows captivated us like “A Different World” (raise your hand if you wanted to go to Hillman College when you grew up). Denise’s eccentric chic wardrobe! The Pit! The Gladys Night episode! But arguably the most exciting part was the fabulous Ms. Whitley Gilbert, played by Jasmine Guy. With her Southern belle airs and delicious on-again/off-again romance with Dwayne Wayne, Whitley was the co-ed we loved to hate. And, oh, was she gorgeous! Her signature look — dramatic red lipstick, movie star brows and a tumble of curls — was much-coveted among an entire generation of wanna-be glamor girls. Jasmine Guy’s brilliantly layered turn as Whitley would’ve been enough to ensure legend status in our book, but her showbiz resume is no joke! The Alvin Ailey-trained triple threat got her start in 1982, when she danced as a regular extra on the TV series “Fame.” In 1988, she landed a plum role as Dina, one of the light-skinned, long-haired Gamma Ray sorors in Spike Lee’s “School Daze” (please check out the “Good and Bad Hair” number…classic!). The following year, Guy vamped through Eddie Murphy’s “Harlem Nights” as sexy siren Dominique, and in 1990, she released a self-titled album that spawned R&B hits like “Try Me” and “Just Want to Hold You.” She’s also enjoyed a successful Broadway career, starring as Crow in “The Wiz,” Velma Kelly in “Chicago” and Rizzo in “Grease.” And this season, she returned to television as Bonnie’s witchy grandmother on “Vampire Diaries!” Jasmine Guy, you’re totally fierce and more beautiful than ever — here’s to you!