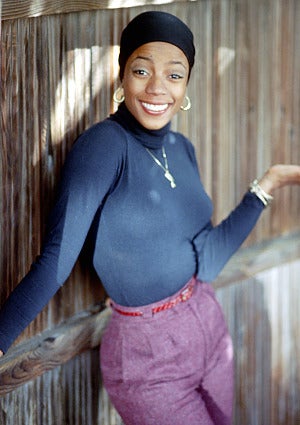 In the Seventies, the ABC show “Good Times” was home to one of the hottest women in show business! Brooklyn-born Bern Nadette Stanis played middle sister Thelma Evans from 1974 to 1979, and was one of the fiercest, flyest Black women of the decade. With her sassy one-liners, fabulous hairdo’s (everything from an afro, to a high bun, to Shirley Temple ringlets), and high-fashion-on-a-budget wardrobe, Stanis’ performance as the inner city Chicago teen made her one of TV’s first Black “It-girls.” Honestly, watching her parade around the Evans’ household in her fabulous, high-waisted bell-bottoms, cork platforms and gauzy halter-dresses, we all wanted to be her! And in a pre-“Fame,” pre-“Flashdance” era, the Julliard-trained dancer inspired a generation with her fabulous moves and leotard-and-ballet skirt ensembles (American Apparel, much?). So before her time. After the show ended, she became an in-demand character actress and went on to launch a successful writing career. Stanis published two books, “Situations 101” and “For Men Only,” and wrote “Who Can You Trust,” a play starring Ralph Tresvant and Melba Moore. But to us, she’ll always be gorgeous, glorious Thelma, the prettiest girl on ABC. Bern Nadette Stanis will be at the ESSENCE Music Festival, will you?
Loading the player...