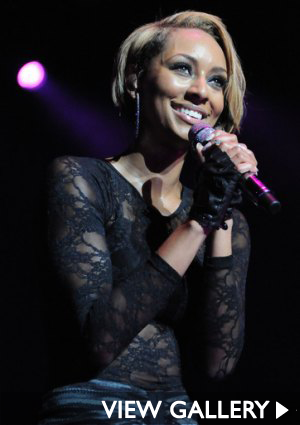 Warming up the second evening of ESSENCE Music Festival, Keri Hilson performed her catchy remix of Trey Songz’s “I Invented Sex” while sporting a black leather corset over a lace shirt with shorts, boots and a blonde bob. Singing cuts like “Get Ya Money Up” and “Knock You Down,” Keri admitted that she thought long and hard about what would make her ESSENCE Music Festival performance amazing. “So I said I need to bring somebody out… the incredible El DeBarge!” Keri told the audience. Gasps and screams went up as more than 100 fans ran to the front of the stage. LL Cool J followed Miss Keri, beginning with “Phenomenon” and the classic “I’m Bad.” Hitting the ESSENCE stage in dark jeans, black t-shirt and a matching skull cap, the MC who made lip licking famous stayed cool despite New Orleans’ sweltering heat. “Anybody in the mood for some passion?” he asked to a screaming cluster of women in the front. From “Love You Better” to “Paradise,” LL worked the crowd, tossing roses from the stage. Taking the audience to the club, he rocked “Headsprung” as the crowd literally shook the Superdome with their excitement. Running through “Round The Way Girl” and “Loungin,'” the Queens MC dimmed the lights before saying “Let’s take ’em back.” And as soon as “Mama Said Knock You Out” blared through the speakers, LL spit his verse and scooted off the stage as if he might return. “Is he coming back?” asked one concert-goer. “But he didn’t even take his shirt off…” It was not to be. Following a young lady named Michelle winning a new Ford car — and thanking God for it — Steve Harvey introduced the fresh faced Gladys Knight. Helped onto the stage by two gentlemen, Ms. Knight was ravishing in a red dress with a dash of sparkle and matching shoes. Touting four background singers and a six-piece band, the soul diva ran through “Hold On” and “Friendship Train.” “This song is for girls but women too, because if we don’t communicate, we’re in trouble,” Ms. Knight told the audience. Launching into “Superwoman,” flanked by two female background singers, Ms. Knight also sang “Part Time Love.” “You gotta know what you want and make sure you get somebody that has a lil’ joy in their spirit,” advised Ms. Knight. She performed a rendition of Michael Jackson’s “Shake Your Body” and “Please Send Me Somebody to Love,” and then continued her heart to heart with the Superdome crowd. “I think ya’ll know by now that when I fall in love, I fall hard,” admitted Ms. Knight just before “Love Overboard.” “Love Hurts” and “Neither One of Us” followed, then Ms. Knight’s brother, Michael, the last remaining Pip, joined her on stage, before she closed her show to a standing ovation. Finally, a very pregnant Alicia Keys hit the stage in a sparkling black tunic with shade of green over black liquid leggings and a fluffy ponytail. Stepping back from the piano in the beginning of her set, Alicia, who recently announced that she’s four months pregnant with the child of producer Swizz Beatz, fell on her backside. Popping up, like Beyonc before her, Alicia continued her string of songs as if nothing happened. However, it was visible that her bum was in a bit of pain. “I saw her fall but she got right back up,” said Kimberly from Cincinnati. “She’s still got it!” Rocking classics like “You Don’t Know My Name” and “I Need You,” it was clear that Alicia is glowing with her pregnancy. As she performed “Never See Me Again” and “Wait Til You See My Smile,” the pianist became inspired and began strumming a white ’80s keytar. “I liked all of her melodies, they were soothing and a nice way to close out the night,” added Kimberly. Soon after, the New York City native played her current hit “Unthinkable” just before “Empire State of Mind” as her finale, ending Saturday night at ESSENCE Music Festival.