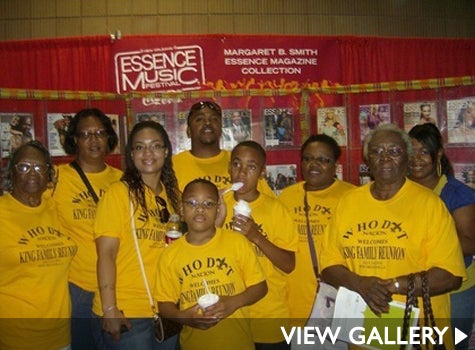 For past 10 years, the Jones and King families have kept up a tradition of biannual family reunions at the Essence Music Festival. The dying wish of the family’s matriarch has brought the extended families of two sisters together. The organizers, Freda Jones and Cynthia King, shared with Essence.com how the tradition began — and what it’s meant for their southern brood. ESSENCE.com: What made you decide to start doing your reunions at the ESSENCE Music Festival? FREDA JONES: In 2000, my aunt Carrie Bunn was terminally ill, and it had been several years since our last reunion. She said that she wanted to have a family reunion; she wanted to see her family’s faces before she passed. So me and my cousin Cynthia Jones, who is Carrie Bunn’s daughter started planning it. My aunt died a month after we had our first reunion. So she got her wish. CYNTHIA JONES: We were successful in having the reunion before my mother died.  ESSENCE.com: Why did you choose the ESSENCE Music Festival as the place to celebrate your reunions? FREDA JONES: We chose it because it’s more of a learning venture for us. We go to the convention center and learn about our culture and we get an opportunity to support people from our culture. And then there are the concerts for the younger people. We all have fun; there is something for everyone.  CYNTHIA JONES: Since a lot of family members have never experienced the festival, we incorporated the festival into the plans and actually had the reunion the same weekend as the festival. ESSENCE.com: How many people attended the first reunion? FREDA JONES: For the first reunion we had about 120 people in attendance. We rented out Bayou Segnette State Park, which is a camp ground right outside of the city in New Orleans. Everyone had to find their way there and then we chartered a bus back and forth into the city to the convention center.  ESSENCE.com: What has the experience been like for your family? CYNTHIA JONES: A lot of family members are from small towns so going to the convention center is amazing to them. We have one nephew who is 17 this year, he said, “Can I stay? I want to come every year.” Seeing that many people was amazing to him.  ESSENCE.com: How has the experience changed your reunions before and after Hurricane Katrina? FREDA JONES: The location where we stayed for the first reunion was completely destroyed by the hurricane, since then we’ve all stayed in hotels in downtown New Orleans. It would be nice to be able to all stay there again because we were able to do a lot more together. ESSENCE.com: Have the reunions made you closer as a family? FREDA JONES: Yes, we now keep in touch all year long, now we know when weddings are and when births of children happen. I now not only know my grandmother’s family, but now I know my great aunt’s family as well. Now I have support not only from my grandmother’s side of the family, but also my great aunt’s family side as well. I’m happy to now have the support of my extended family. CYNTHIA JONES: Yes we started the King family Facebook page so that we can keep in contact year-round. We definitely communicate more as a family since starting the reunions. ESSENCE.com: Why is it important for you to continue doing these family reunions? FREDA JONES: My mother Magdalene Shraopshire is the elder of the family. Because of her strong will, we are able to continue on with these reunions. She taught us the importance of continuing with it. We are just some hard working people who just want to enjoy ourselves.
Loading the player...