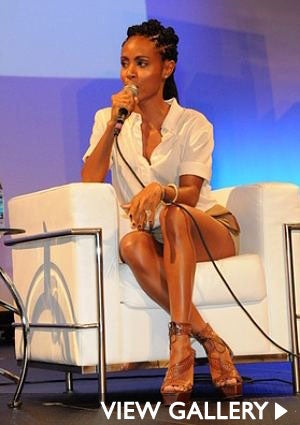 Acclaimed actress and producer Jada Pinkett-Smith explained why she got naked for the July cover of ESSENCE Magazine during the education seminar at the ESSENCE Music Festival. “I try to represent a certain type of being” Pinkett-Smith said of relaying self-love to her daughter Willow. Pinkett said, when she showed Willow the picture she said, “Wow mom you look so elegant. I’m so happy to be Black.” The audience clapped loudly. Pinkett-Smith joined the education seminar to discuss her and her husband Will Smith’s school and their approach to teaching and learning. “My dream is that every child has a curriculum specifically created for them because every child is unique,” Pinkett-Smith said. Pinkett-Smith also spoke about the role that education and her grandmother played in her childhood. “Education and performing arts helped me recognize there was more to the world than my neighborhood,” she said. “It was my liaison to the outside world.” Growing up in Baltimore with two parents, addicted to drugs, Pinkett-Smith admits that she was “going down a bad path” before she went to North Carolina School of the Arts. Pinkett-Smith has a strong message for all the Black women in the room, that we need to “passionately embrace ourselves and love ourselves.”
Loading the player...