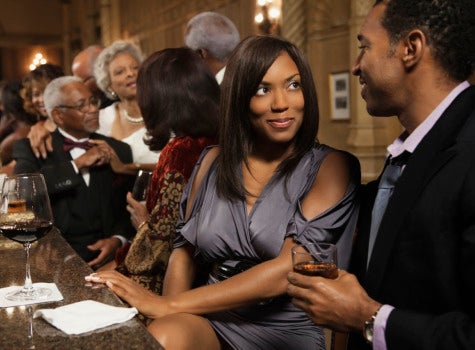 ESSENCE Music Festival is where all the beautiful people will be this fourth of July weekend — got tickets? Don’t miss your opportunity to make a connection because you’re too shy to approach him. Remember men like it when we hit on them. Here are a few conversation starters that will help you make the first move.

Compliment His Shoes
With different experiences at every corner of the convention center, you’ll be walking a lot to get the full ESSENCE Music Festival experience. Show him that you notices his stylish, yet comfy kicks. The flattery is likely to make him open up.

Share some gum
You’re in Cajun food capital. That means bold flavors and bad breath. Keep a pack of gum handy so you can offer a stick to that hottie standing next to you in line. After you’re good deed, he’ll be generous with the conversation.

Take a Picture
There’ll be so many beautiful Black people at the ESSENCE Music Festival. Show him that you noticed he’s a looker by asking him to take a photo with you. After you say “Cheese!” Ask him about himself.

Ask Him What He’s Up To
There’s tons to do at EMF 2010. Find out his interests by asking him what he’s getting in to.

Crack a Joke
It’s no secret that men love women with a sense of humor. Show off you’re funny girl and make him laugh. You’ll be golden after that.

Play favorites
Ask him, “What’s your favorite thing about EMF 2010 so far?” Exchange the cool experiences you’ve both had to get to know each other.

Tell him something he doesn’t know
If you’re a festival buff who’s been to EMF before, tell him what he should be getting into. You’ll definitely enhance his experience.

Get to know his company
If you see a guy you like, ask him who he’s at the ESSENCE Music Festival with. You’ll learn a lot about him just by the company he keeps.