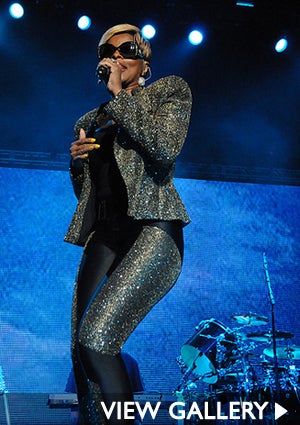 Sporting an open white shirt revealing a tight tank top and jeans, opening act Trey Songz played hits from his breakthrough album, “Ready,” backed by a five-piece band.   “This place is filled with some of the most beautiful, intelligent and significant women in the world,” said Trey. “From the front row all the way to the end baby.”   As he ran through sensual tracks like “Panty Droppa” and “Neighbors Know My Name,” the crowd rose to their feet. “TREY!?!” one young screamed when he asked the audience to call his name.   He performed “I Invented Sex” over the beat of Lil Kim’s “Crush On You” followed just before his set closer.   “Make some noise for Jill Scott and the queen of hip-hop soul, Miss Mary J. Blige,” said Trey. “But before I go…” Busting into “Say Ahh,” Trey finally gave the ladies what they wanted — his shirt. Stripping off his top, the crooner tossed it to a young lady in the crowd who almost ripped the garment apart in her excitement. Then it was time for some grown woman music.   As the driving bass of “Gimme” thundered through the Superdome, Philadelphia’s Jill Scott took the stage dressed in a sparkling black body suit and belted matching leather skirt. Flowing through “Real Thing” and “Whatever,” Jill added an emotional kick to “Insomnia.” “It’s 5 o’clock in the motherfuckin’ morning… and I’m feeling blue,” she sang, amid screams of affirmation from the crowd.   Running through “Its Love” and “Crown Royal,” she also performed her newest single, “Love You” along with “Hate On Me” and “Long Walk” to a go-go beat.   “It seems they want us off the stage, so give us all you’ve got!,” Jill said as she wrapped her set with “Golden.”   Then came the queen of hip-hop soul.   In a structured glittering coat with cap sleeves and matching belted pants, heels and sunglasses, Mary J. Blige hit the stage, energetically performing “The One.”   “Where my ladies at?!” She asked the screeching crowd, as her four background singers stood to her left in dark shades. “Tell them to stop playing house with you!”   “Enough Cryin” and “You Bring Me Joy” followed, along with “Be Happy,” “Real Love” and “Everyday It Rains.”   Then Mary took the crowd to her Curtis Mayfield inspired cut, “I’m the Only Woman.”   “This is my new song ‘I Love You,'” said Mary. “Because sometimes you don’t know if he loves you or not.”   After rocking her new jam, Miss Mary prefaced “Love Without A Limit” by sincerely thanking the crowd.   “To everybody I’ve seen out and at the convention center, I just want to say I love you, I hope you’re doing well! Thank you for your support.”   “Feel Like A Woman” and “I Feel So Good” came before MJB dipped off stage for a quick change. Returning in a belted denim short outfit, she performed “Hood Love” with a surprise guest — R&B’s most popular man, Trey Songz. “That was a surprise,” she said, laughing with the crowd as she launched into “I Am.” “Sweet Thing” came next and the audience sang the entire bridge as Mary pointed her mic toward them, same with “I’m Going Down,” and an emotional rendition of “No More Drama” followed. “I might not be perfect for you, but I’m perfect for me,” said Mary. “It can only make me better to know that I’m imperfect… There’s only one you!”   “Good Love” came next to lighten the mood, with another surprise guest, T.I., amid screams and flying panties. OK, we’re kidding about the flying panties… kinda.   “Just Fine” signalled the end of her set, and the beginning of the incomparable Earth Wind and Fire.   In complimenting all-white costumes, Earth Wind and Fire took the stage to the sounds of their disco classic “Boogie Wonderland.” “Shining Star” was next, along with “Can’t Hide Love,” “Sing A Song,” “Shining Star” and “That’s The Way of the World.”   “I love Earth Wind and Fire, they’re timeless!” said Tracey, from Chicago.   “Would You Mind” and “Betcha” came next.   “If you know this song, then you’re a true blue fan,” lead singer Philip Irvin Bailey told the audience.   “Keep Your Head To The Sky” followed as the crowd two-stepped and sang along.   “For Maze not to close… it was a big deal” said another concert-goer. “But I’m glad it was Earth Wind and Fire and not Maze though!”