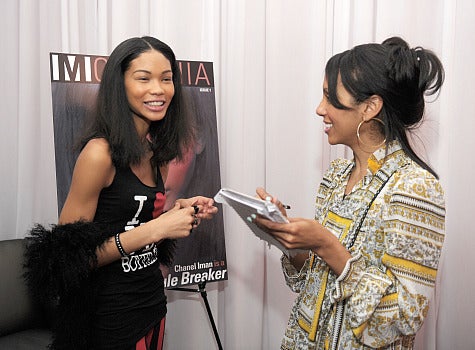 We’re huge fans of Modelinia.com—the go-to site for all things model-related–so we were thrillled to discover that A.) the website was launching it’s own magazine, and B.) Chanel Iman was gracing the cover of Modelinia’s very first issue (three other covers are also in rotation, featuring top models Coco Rocha, Kemp Muhl and Emily Didonato). We caught up with the jet-setting supermodel at Bryant Park’s Mercedes Benz Star Lounge today, as she celebrated her fabulous coup. CHANEL IMAN: Happy Valentine’s Day! ESSENCE.COM: Happy Valentine’s Day to you, too! We’re not going to be tabloid-y and ask you if you have a Valentine today… CHANEL IMAN: No, it’s cool! I actually do have a Valentine…check out my shirt, it says ‘I Heart My Boyfriend.’ ESSENCE.COM: Okay, that’s the cutest thing, ever. So, Chanel Iman, we know it’s only day four of Fashion Week, but what’s been your favorite trend so far? CHANEL IMAN: Well, I can’t really say because I was in Miami until yesterday afternoon. I have Diane von Furstenburg later today, and I’m also walking in Thakoon and Ralph Lauren. I love Ralph Lauren…I always look forward to doing his show. The pieces are just so classic and elegant. ESSENCE.COM: As glamorous as Fashion Week is, it can also be crazy hectic. How do you prepare for the week? CHANEL IMAN: I always go home to L.A. for a little while to get myself together. And I love to cook; it relaxes me. Fashion Week is long and stressful, so I like to balance it out by doing regular things that make me feel normal, like clean the house and do chores. Tonight I’m doing the laundry! ESSENCE.COM: What makeup do you have in your bag right now? CHANEL IMAN: Let’s see, I always have my Bobbi Brown Foundation Stick, and Anastasia’s Brow Kit. And Rosebud Lip Salve…it’s the best. ESSENCE.COM: And in the spirit of Valentine’s Day, what do you think are some of the sexiest fragrances? CHANEL IMAN: I alway wear Romance by Ralph Lauren and Chance by Chanel. I also love Flora by Gucci…so good! ESSENCE.COM: The headline on your Modelinia magazine cover says ‘Chanel Iman is a Rule-Breaker.’ What does that mean to you? CHANEL IMAN: Essentially, it means that I break rules with my fashion and style. I don’t like to wear the same kinds of clothes over and over, you know? I like to take risks. Modelinia magazine will be distributed in prime spots throughout New York City, including The Bryant Park Hotel, The Bryant Park Tents and MILK Studios. Read More: Chanel Iman Adds ‘DJ’ to her Resume Chanel Iman’s Angel Face Live Streaming of New York Fashion Week
Loading the player...