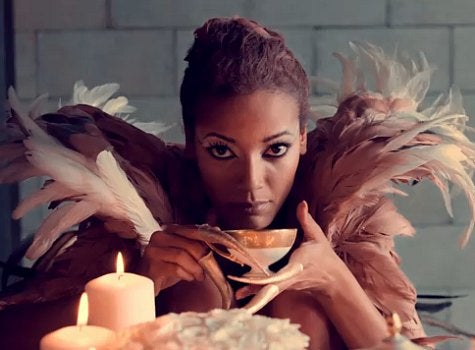 Kanye West’s new short film “Runaway” is pretty genius and the music is incredible, but let’s be honest — the standout is Victoria’s Secret supermodel Selita Ebanks, who plays a supernaturally stunning phoenix who enchants ‘Ye with her otherworldly, birdlike ways. Not only were we transfixed by her performance, we died for her makeup, hair and costuming. Here, the It-girl talks faux lashes, feathers, and the fierce Hollywood magic that went into the creation of her fantastical look… ESSENCE.COM: What was the inspiration behind the Phoenix’s look? SELITA EBANKS: We didn’t want her to look like an actual bird; we wanted her to be futuristic and modern with birdlike features. So we did things like white lashes on top of black lashes, feathered polkadots on the sides of my eyes, and lots of contouring. Really, the sillhouette of my face is already birdlike with my big eyes and cheekbones–so it was about exaggerating what was already there! ESSENCE.COM: You spend the whole film wearing little more than feathers. Was it hard to act in so little clothing? SE: Being a Victoria’s Secret model, you get a crash course on getting over your insecurities as a woman! But Kanye was so accomodating. We decided on nude feathers, so it looked like I was nude. I had to wear a lot of tape and stretchy rubber bands to hold the feathers together–and I had tape on my boobs to push them up.  ESSENCE.COM: Sounds painful! SE: It was! It was four days of the same makeup and taping, and when I took it off, it would rip my skin off. Then we’d put tape on the scab the next day, and rip it off again! It was all good…beauty is pain. Plus, Kanye had such high expectations of me–it was like, “Get in hair and makeup, get to set, and action!” I never wanted to be the reason the film didn’t work, so I just went with it. One day a rabbit scratched my boob to the white meat, but I stuck a feather on it and kept on moving. ESSENCE.COM: You’re a trooper, girl! So, how did the super-dramatic makeup and costume help you inhabit the character? SE: It’s like modeling. When you do editorial, you’re completely transformed–they bleach your eyebrows, change your haircolor–and you become someone completely different. I’d get in the chair as Selita, and two hours later, I’d emerge as the phoenix. I couldn’t have done it with the hair and makeup!